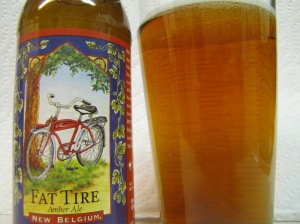 I have recruited my husband Max to review beer for you, and he begins today by telling you about a popular modern classic, Fat Tire Amber Ale by New Belgium Brewing Company:

I like beer. Well, that’s certainly not unusual–a forty something guy who enjoys beer. I don’t think I fall into either of the two typical categories of middle aged, middle class beer drinkers, however; I’m not a “whatever ya got” domestic lager and pilsner guy who drinks beer simply to drink beer. I actually enjoy beer, in the same way that I might enjoy a good burger, a savory snack, or a nice cup of juice or tea. But, on the other hand, I’m not one of those micro-brew snobs you see spending forty bucks on some IPA that I’ve traveled 200 miles to pick up, either. I’m not above a lager, but I really prefer a decent amber. Sometimes in winter, a stout is great, and a decent Hefeweizen in late spring is very tasty, but my go-to most of the year is an amber.

So, if I’m going to talk to you about beer, I’m going to start with a classic amber, Fat Tire. Ambers are technically dark ales, with an emphasis on the malt flavors with some added fruitiness, as opposed to a pale ale’s emphasis on the hops. That means ambers are really smooth, with a kind of substance to them. These qualities mean ambers are seen as a kind of “training wheels” beer by the beer snobs. Like I said–I’m unusual in that I’m fine with the beer snobs thinking of me as having an unrefined palate–I just want a tasty beer.
New Belgium’s Fat Tire is a rather easily obtained amber that’s not made by a giant beer conglomerate; hence, of my go-to type of beer, Fat Tire is the most readily available type. That doesn’t mean it’s a second choice, though. This stuff is so popular for a reason–it’s a beer your average Budweiser drinker can recognize as a tasty beer, yet a beer snob can taste some complexity in it (hence the “training wheels” tag). My point is that 4 out of 5 beer drinkers will like this amber, and–much like with Elvis–50 million fans can’t wrong, right?
Fat Tire has a lightly malty taste with faint aromas of biscuits and jam plus a slightly bitter finish, so it cleanses the palate as you drink it, unlike a soda or a stout, where the flavors linger until they becomes overwhelming. Fat Tire has some caramel notes and some apple flavors, too, so pair it with anything you think would go with biscuits, berry jam, apples or caramel. Chicken, pork, and seafood work especially well–like a good club sandwich, or a nice cashew chicken with fried rice. Overall, if I had to introduce aliens to beer–Fat Tire Amber Ale is where I’d start.  –Max
Where I got my beer: Frederick Wine House
Where you can find this beer: Most liquor stores.