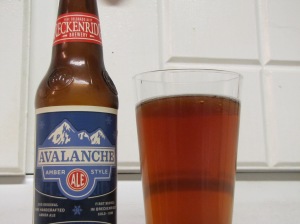 My husband Max continues his beer reviews for you with a fast rundown on Breckenridge Avalanche Ale:

Last time I talked to you about my baseline, “go-to,” anytime beer, a basic amber ale from Fat Tire. This week, I’m getting a little more “crafty” and going with Breckenridge’s Avalanche Ale. It’s another amber ale, but a little more crafted–meaning a little more thought and trial-and-error went into this one.

It’s still an amber, meaning it’s not an acquired taste–you could set down your nephew on his 21st birthday for his very first beer ever, and if it was an amber like the Breckenridge Avalanche, he’d probably like it.

What makes the Avalanche special, however, is it’s less fruity, more chocolate and caramel than other ambers; it tastes very malty, but the hops cleanser at the finish has a more shaped bitterness, like a fine dark chocolate.

The 3.52% alcohol level means it’s rather light for a craft beer (you should see the alcohol content on some beers–the Brewmeister Armageddon is at a whopping 65%!), but the Colorado water used to make the Avalanche is exceptionally clean (I’m no Coors fan, but they’re right that the water is good in Colorado), so this is a remarkably refreshing beer–which is dangerous in itself–you could easily polish off a dozen without getting a skunky, cloying or intense one in the batch. I think your kidneys would explode before you could drink enough of them to find a bad one, if you follow me.

Breckenridge Avalanche Ale won’t necessarily win over your craft beer snob friends, but that’s only because the flavor is relatively light. What this ale does absolutely perfectly, though, is pair well with classic American grilled foods like burgers, hot dogs, and chicken breasts, so you’ll probably have better luck trying this one out with your buddies on game day. And, yes, friends, that makes for a great beer, too. Serve it icy cold on a hot day, such as in place of your usual Corona, and I bet you’ll be wholly satisfied.

Where I got my ale: Ye Old Spirit Shop, Frederick MD

Where you can get your ale: Where most craft beers are sold; use the Breckenridge link at the top of this post to check for locations near you.